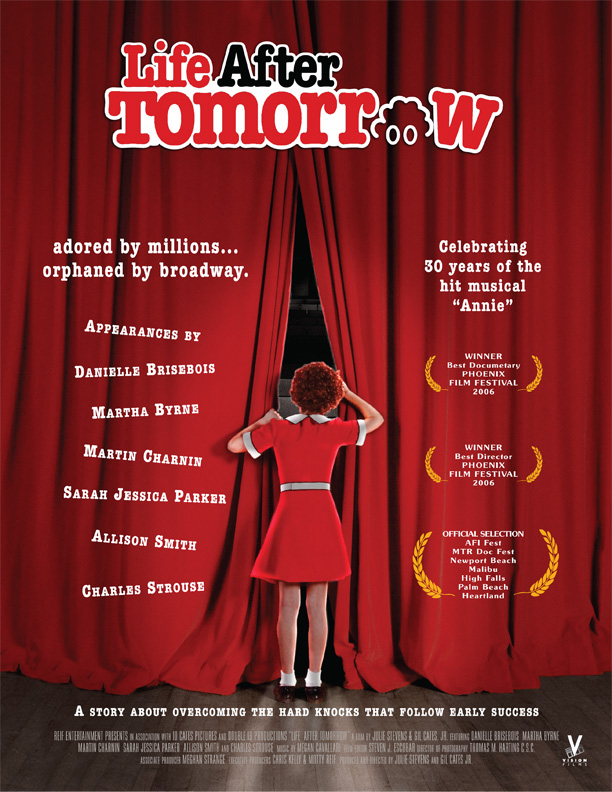 What happened to the girls who played orphans in the hit Broadway musical Annie? Some went on to fame and fortune, like Sarah Jessica Parker, Alyssa Milano and Molly Ringwald, while others struggled with their "Life After Tomorrow." Find out what happens when orphans grow up.

Life After Tomorrow explores the life-changing experience of being a child performer in the hit Broadway musical, Annie, and provides a candid look at the hard knocks that follow early success. The film reunites over 40 women who played orphans in the show’s original run on Broadway, from 1977-1983. The documentary also represents the unique and personal story of its co-director, Julie Stevens, who was a cast member. Life After Tomorrow offers a glimpse of what the “Annie” experience was like and how it shaped the lives of the young women who have gone on to both performing and non-performing careers. Former orphans appearing in the film include MSNBC anchor, Dara Brown, actress Sarah Jessica Parker, recording artist Joanna Pacitti, Emmy award-winning actress Martha Byrne, TV actress Allison Smith, and songwriter Danielle Brisebois. The film also visits with the creators of “Annie” (writer/lyricist Martin Charnin and composer Charles Strouse), fans, agents, and adult cast members. With a Broadway cast and four national touring companies, "Annie" ran for over five years and 2,377 performances on Broadway. For some, "Annie" marked the beginning of a fruitful career in show business. Many were able to use the opportunity as a springboard to related careers in entertainment. For others, the incredible experience at such an early age was enough of a taste of show business to last a lifetime. Some girls found themselves struggling with feelings of loss and frustration with having their show business careers end so abruptly. The film is an honest look at the difficult transition child performers must make into adulthood. As former Annie, Kristi Coombs, remarks, “I feel like my career could not have peaked at ten!”