When a young, virginal American girl (Misty Mundae) learns of her mother’s death in Paris, she travels to the City of Lights for the funeral. Sad and alone, she wanders the exotic city in search of answers, finality, and peace of mind. When she is befriended by a mysterious and voluptuous woman (Tina Krause), little does she realize that this luscious Parisian beauty is a modern-day vampire looking for vulnerable victims. Her innocent girlish charms and sensual young body arouse this predatory creature of the night, and the two of them begin a torrid affair that pushes the bounds of female lust and eroticism to new heights. As their lesbian relationship intensifies, The mystery woman is able to conceal her vampire identity and unquenchable thirst for blood from the girl. But soon her true animal nature can no longer be hidden, and the virginal beauty must face the horrifying reality of her fanged lover. Will they remain eternal bedmates, or will predator devour prey? 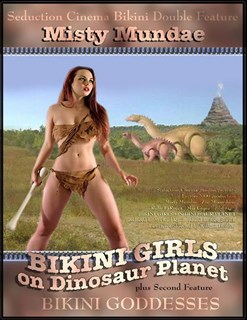 When a pair of time-traveling alien beauties stumble across Earth as it was one million years ago, they are confronted by a ménage-a-trois of sex-crazed cave-girls (Misty Mundae, Ruby LaRocca, Lily Tiger) and a land populated by rumbling dinosaurs. It's not before long that the fur-clad lesbian cave-babes get down to some serious grunting and groaning and teach the curious space visitors a thing or two about juicy Jurassic love.

Caress Of The Vampire 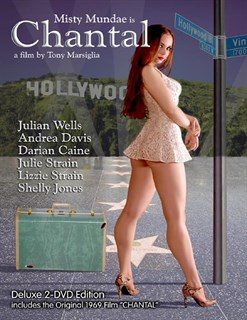 An innocent and naive young woman arrives in Los Angeles to make it as a big-name actress, only to suffer though the pain and humiliation of the casting couch routine again and again thus getting a first hand look at Hollywood at its worst.

When an old 16mm film projector shows up at their doorstep, roommates Beth and Jackie aren't quite sure what to make of its mysterious appearance. The young women quickly discover that the whirring machine is haunted: it turns on at will and projects non-stop footage of ultra-erotic stag loops from the 1960s and 70s.

Dr. Jackie Stevenson (Julian Wells) is a controversial therapist who believes the female psyche consists of the 'pure' and the 'lustful,' and she has developed an experimental serum that will separate the two halves, thus freeing women from psychological and sexual inhibitions.

A young couple on a romantic vacation purchase a mysterious antique mirror possessed by the ghost of a whorehouse madame who's power forces the woman and all her female friends to act out their inter most sexual desires.

Erotic Survivor is a voyeuristic game decided by wits, willpower and wild eroticism as two teams stranded in a remote tropical forest battle the elements and themselves to see who will come out on top and win the million dollar Grand Prize. For the all-girl team that quickly discovers it's made up of full-blooded, hot-bodied lesbians, you can be sure each of them will wind up "on top"… several times! That's because their competitions are performed on one another - with taut, writhing bodies and eager, sensual mouths forming the kinds of alliances you'll never see on TV. And unlike the other team that strives to win, these girls strive to sin, and their uncensored, uninhibited teamwork will likely turn the next tribal council into a steamy orgiastic ritual!